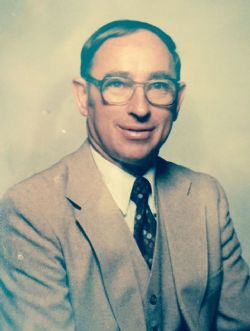 Richard Arnold Simpson, 81, resident of 2101 Old Calhoun Falls Road, passed away on Tuesday, February 23, 2016 at Hospice House in Greenwood with his loving family by his side.

Born in Abbeville, he was a son of the late James Monroe Simpson, Sr. and Anna Goff Simpson.

Richard was a veteran and served his country in the United States Army. He served as coroner of Abbeville County for over 30 years. He retired as owner and operator of Simpson Union Service Center and, upon his retirement, he went to work for Chandler-Jackson Funeral Home as a funeral assistant, where he was currently employed. He was a faithful member of Warrenton Presbyterian Church, where he was a former Elder and member of the Secession. He founded the Abbeville Rescue Squad, was honored for his Emergency Medical Services in 2016 and received a proclamation for his services to Abbeville County in 2015.

Survivors include three sisters, Thelma S. Young of Pomaria, Bobbie Proctor of Greenwood and Doris Smith of Abbeville; a great nephew, Michael Smith, who was raised in the home; two special nieces, Jerri Smith and Deanna Smith; and a number of other nieces and nephews.

He was preceded in death by a sister, Alice Seawright and a brother, James Monroe Simpson, Jr.

Funeral services will be conducted on Saturday, February 27, 2016 at 11:00 a.m. in the Chandler-Jackson Funeral Home Chapel with Revs. Greg Dixon and Marion Argo officiating. Burial will follow in Long Cane Cemetery.

The family is at the home of Doris Smith, 89 Watts Road, Abbeville.

The family will receive friends from 5 until 7 p.m. Friday, February 26, 2016 at Chandler-Jackson Funeral Home.

Memorials may be made to Warrenton Presbyterian Church, 191 Watts Road, Abbeville, SC 29620 or to HospiceCare of the Piedmont, 408 W. Alexander Avenue, Greenwood, SC 29646.