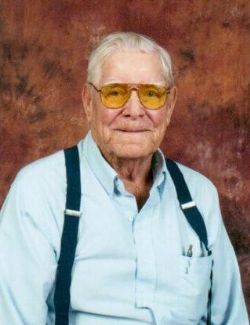 Leonard Jessie Ashley, Sr., 90, resident of 296 Old Calhoun Falls Rd. widower of Eunice Beasley Ashley passed away peacefully Sunday Feb. 10, 2014 at his home with his loving family by his side.

Born in Abbeville Co. SC he was a son of the late Lawrence O. Ashley and Bessie Bell Ashley.

Leonard was a retired Twister-Fixer with Milliken Textiles with over 43 years. He was a United States Army veteran having served with the 269th Artillery division during World War II. He was a mason and a member of the Clinton Lodge #3 AFM. He was a member of South Side Baptist Church. Leonard will be missed by his loving family and his many friends. He will be remembered for his gentle and caring manner.

He was pre-ceded in death by a great-grandson Gabe Cooper; 4 brothers Harvey, Iva, John Orr and Proctor and 3 sisters Edna, Eva Mae and Margaret.

Funeral services will be conducted Friday Feb. 14, 2014 at 2:00 in the Chapel at Chandler-Jackson Funeral Home with the Revs. Calvin Smith and Tony Temple officiating. The burial will follow in Keowee Baptist Church Cemetery with Military Honors. The family is at the home of his daughter Mr. & Mrs. Kenny Cooper 296 Old Calhoun Falls Rd. Abbeville, SC.

The family will receive friends from 12:00 until 2:00 PM prior to services.

Memorials in memory of Leonard may be made to a charity of one's choice.

To order memorial trees or send flowers to the family in memory of Leonard Jessie Ashley, please visit our flower store.