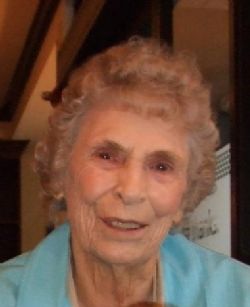 Born in Lowndesville, SC she was a daughter of the late Julius McSwain Bradberry, Sr. and Nora Belle Jenkins Bradberry.

Evelyn was a graduate of Antreville High School and received her B.S. Degree from Winthrop College. She was also in the Army School of Physical Therapy. Evelyn served her country as a member of the U.S. Army Medical Specialist Corps during WWII having served 2 years overseas in Australia, New Guinea and the Phillipines. She was a retired Physical Therapist with the Veterans Administration. Evelyn was a member of Sacred Heart Catholic Church.

She was preceded in death by a daughter Jennifer Roosmann, a sister Mona Cason and two brothers Warren and Mack Bradberry.

A Memorial Celebration will be conducted Thursday March 20, 2014 at 2:00 PM in Sacred Heart Catholic Church with Father Bob Sayer officiating. The burial will follow in Midway Baptist Church Cemetery with military honors.

The family will receive friends on Wednesday March 19, 2014 from 6:30 until 8:00 PM at Chandler-Jackson Funeral Home.

To order memorial trees or send flowers to the family in memory of Evelyn Margaret Bradberry Roosmann, please visit our flower store.