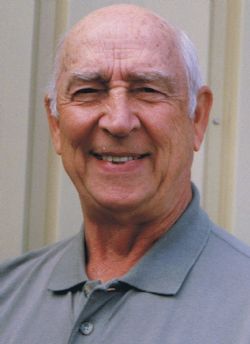 Clarence Leonard "Larry" Johnson, 93, of Abbeville, died Wednesday, June 8, 2016 at the Hospice House at Greenwood. He was born in Bend, Oregon to the late Harry Emmanuel Johnson and Lea (Lindstrom) Johnson.

Larry was a Class of 1941 graduate of the High School of Music and Art in New York City, a magnet school for those with exceptional talent in the arts. For his entire life, he was engaged in graphic arts design, photography, and painting in many media. He worked as an art director at ABC, Metromedia, and CBS in New York City, and later in life at the University of New Hampshire at Plymouth.

After serving in World War II at Normandy, Sicily and Iwo Jima with distinction, he returned home to marry Constance (Connie) Madsen. They raised four children before retiring to McCormick and later Abbeville.

Larry will be remembered fondly for his quick wit and enduring sense of humor. A celebration of his life will be held for family and friends on Friday, June 10 at 4-6pm at the Wilson home. Burial arrangements will be made at a later date.

The family requests a donation in lieu of flowers be sent to the HospiceCare of the Piedmont 408 W. Alexander Ave. Greenwood, SC 29646; and gives special thanks to Abbeville Home Health Care and to Self Regional Health Care Center for providing excellent care.